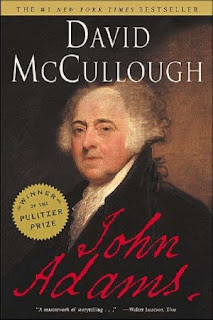 Image from abdurmalik
Leave it to HBO to give me a long-overdue Social Studies lesson on our second president. The seven-part miniseries John Adams -- based on David McCullough's biography -- spans this oft-overlooked Founding Father's political journey, giving us an idea of just what gumption it took to establish a nation.

That said, while we can admire these decisions in hindsight, it's sometimes difficult (at least for me anyway) to put them in any modern context. Our modern revolutions seem sanitized. Our American personality is well-defined. Instead of flowery oratory, our politicians tend toward bloviation. And it's hard to imagine John and Abigail tweeting 140 love characters to each other.

But that's why this series hit home for me -- because once I got past the wigs, and the quills, and the antiquated speech, I found universal lessons of leading with bravery. To wit:

* "Brave the storm in a skiff made of paper."

As the Continental Congress debated the prudence of war with Britain, John Dickinson of PA followed his beliefs and staunchly opposed the war, even though he was quite the odd man out. Though his frightening vision of post-war ruination didn't come true (thank God), he was still a needed ballast, a necessary reality check, for the fiery patriots among the group. For in trying to convert him, the hawks better articulated their position and clarified their goals. Lesson: Devil's advocates can justify/reinforce/temper/refine visionaries' visions.

* No one can stage a revolution alone.

John Adams brought his gift of reason and oratory. Sam Adams brought initial passion and inspiration. Washington brought natural leadership. Franklin brought good humor and diplomacy. Jefferson brought writing skill. Abigail brought common sense and stability. All told, they balanced one another out and were able to reach unity with a cohesive plan. The best example of this: when Adams asks Jefferson to draft the Declaration of Independence, because he knows he will do the best job. Lesson: Bring strong partners on the journey.

* Sometimes, there's just no time to plan every detail.

The naysayers had every right to be concerned -- the colonies had no army, navy, weapon stockpiles, etc. But inaction brought the fledgling country to a point where they had to act or die. They resigned themselves to making it up as they went along. But what did they know? They knew they had to be allies in the fight. They knew they had to declare absolute independence -- which made backing it up imperative. Lesson: Have the end goal in mind, but don't let the perfect become the enemy of the good.

Now, I still have a couple episodes left in the series, so let's see what other lessons emerge. For those of you who have seen the series or read the book -- what did you take away?
Posted by Julia Rocchi at 6:15 PM