Back in the day, when I was no taller than a kitchen chair and my little brother was exactly that -- little -- we played hide-and-seek all over the house with our mother.

Hiding places came easy. We were tiny, springy, packable kids, able to wedge ourselves anywhere. However, I hadn't yet learned the art of silence, so Mom usually found me via giggle echolocation. And my brother thought that simply sitting in a corner and putting his hands over his eyes made him invisible to others.

When it was Mom's turn to hide, she had an advantage over us: the ability to stay quiet. So though she was not quite as flexible or cram-able, it took us longer to find her.

I'd take one floor. My brother would take another. I'd peer in all the spots a big kid could reach. And my brother would play the baby card -- a plaintive repetition of "Mommy, where oo?" until her maternal heart relented and she revealed herself to us.

Now that I'm a grown-up, I sometimes wish I could play that baby card. How easy it would be to wander around in a sad daze, asking the one question that is sure to tug God's heartstrings -- "Where oo?" -- and sucking my thumb until the answer appears.

Too bad that's not how it works. Both God and I are too big to hide in the usual places. The game takes place in the open. No secrets, no counting. Why, then, do I still cover my eyes and think myself invisible?

I'm not ready, yet here You come.

I SAID I'm not READY.

You are so annoying. Play by the RULES.

Arrrgghhh. FINE. I'll do the best I can.

Still not ready. Yet here You are.

Am I ready now?

Amen.
Posted by Julia Rocchi at 4:00 AM No comments:

Said she'd take a look at my palm
Said "Son do you feel kind of warm?"
And she looked into her crystal ball
Said "You're in love."

Said it could not be so,
Not with all the girls I know.
Said when the next one arrives
Looking into her eyes.

Because none of them can help you anyway
So you might as well rely on uncertainty
And have some faith you'll learn what to do
When the time, the place, the decision comes

Until then use the I Ching sticks as kindling
Unfold the horoscope to line the birdcage
Because the root of all divination
Is to be inspired by God.

Amen.
Posted by Julia Rocchi at 5:48 PM No comments: 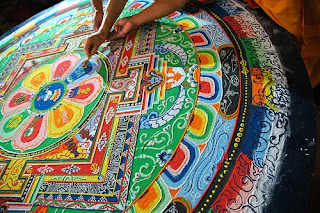 Photo by Wonderlane
Prayer #109: Hold Me

Amen.
Posted by Julia Rocchi at 4:21 AM No comments:

"Early on the first day of the week, while it was still dark, Mary Magdalene went to the tomb and saw that the stone had been removed from the entrance. So she came running to Simon Peter and the other disciple, the one Jesus loved, and said, "They have taken the Lord out of the tomb, and we don't know where they have put him!"

So Peter and the other disciple started for the tomb. Both were running, but the other disciple outran Peter and reached the tomb first. He bent over and looked in at the strips of linen lying there but did not go in. Then Simon Peter, who was behind him, arrived and went into the tomb. He saw the strips of linen lying there, as well as the burial cloth that had been around Jesus' head. The cloth was folded up by itself, separate from the linen.

Finally the other disciple, who had reached the tomb first, also went inside. He saw and believed. They still did not understand from Scripture that Jesus had to rise from the dead." -- John 20: 1-9

My first impulse is to give him a backstory and some Biblical context, putting him squarely in the murky past. But I don't need to, nor should I.

This disciple belongs in the present. He is our contemporary. The tomb he runs into is the same we encounter each day when we look for Jesus in broad daylight but can't see Him. Not yet, anyway.

"They have taken the Lord out of the tomb, and we don't know where they have put him!"

How does one misplace a God? Quite easily, it seems.

I often don't know where I've put You. I think I have You safely stored, and then You vanish, defying my compartments and asserting Your ubiquity.

This Easter season, You once again challenge me to find You on Your terms. You tear my gaze from the abandoned strips of linen and force me to look beyond the quiet tomb's opening, out into a swirling world that breeds confusion, loss, indignity, iniquity, and sorrow.

You give me a tall order -- to find You amid this chaos, to love others as You love me. Frankly, I'd rather keep mooning over the strips of linen. It's much easier. But, as I've come to realize, not nearly as fulfilling.

May I rise to meet Your challenge, Lord. May I leave in the tomb the shrouds that obscure my faith, and find You on the sunlit road.

Alleluia, amen!
Posted by Julia Rocchi at 9:30 AM 1 comment: