The natives grow more restless by the day. All they’ve had to sustain them recently in terms of interpersonal communications are a few vague trail markers and some generic clapping at the last tribal dance that could have applied to anyone in attendance. These brief encounters have not satisfied their need for emotional connection or moved them anywhere closer to their stated goals of finding a proper mate. (Note: We must assume they stated these goals. In truth, we witnessed only stick-thumping, grunting, and some rather rude hand gestures.)

They seem to be in a state of constant irritation, unmitigated by the obvious fact that they are surrounded by a close-knit community who supports and cares for them and would never let them go hungry or be dragged off by a wild boar without at least some semblance of a fight. Some of the more irritated members have taken to sitting on distant hilltops and gazing for hours, chin in hand, at the empty, dusty vistas. Others eat whatever food they can reach, no matter how short village supplies are, while others lock themselves away in their huts during daylight hours, rarely to be seen or heard.

When one such self-isolator left for a brief trip to the loo, we confiscated a small stack of crude stick figure drawings that, with their angry expressions and depiction of tears flooding from eye sockets, appeared to indicate angst. We attempted to communicate with her about the drawings upon her return, but she burst into an incomprehensible screaming rage and ran back into the hut alone. Had there been a door, we’re certain she would have slammed it.


In what is likely a breach of scientific ethics, we have tried at various intervals to match-make tribe members, urging them to recognize the complementary mates in their midst. Alas, our efforts have borne scant fruit. It strikes us that the closer a tribe member is to another, the harder it becomes for him or her to recognize the inherent compatibility of their pairing. They will pine for the other and exhibit jealous behavior if the other should take up with another potential mate; yet if the other does express desire, he (or she) is immediately, coldly spurned. It could very well be our language barrier presenting itself, but the natives don’t seem to know what they want. As of this entry, we have not arrived at any clear conclusion about their reasoning.

Some members have successfully paired off on their own – “success” in this case ranging from “actively engaged with and attentive to one’s mate” to “tolerating them.” Occasionally we observe the pairs interceding in the affairs of those they care most about, such as inviting the interested person and his/her object of interest along on the same hunting party, wherein the paired couples, with poor acting skills, stay a notable and obvious 10 feet away from the as-yet-unpaired couple and whisper back and forth to each other, presumably about how well they’re getting on (or not). It has been a consistent observation from our field staff that such outings rarely work, though efforts appear appreciated in the short term.


Even in the absence of lifelong mating, a fair amount of copulation happens throughout the village. This frequent and persistent activity seems to happen with or without stated commitment, and in fact seems to have a frequency level inversely proportional to the commitment level. (We’re still analyzing the data and hope to report more conclusive results at next entry.) Strangely, the heightened level of copulation, particularly on feast days and in cold weather, does not seem to markedly increase the natives’ long-term happiness, while the paired couples -- whom we regularly observe sitting outside their huts staring at sunsets and munching nuts -- appear blissful and content. The research team intends to probe further into this inexplicable phenomenon, tentatively titled the “Copulation < Nuts Paradigm.”

Of late, the natives appear to be moving toward a less personal system where they can anonymously share information with a disinterested and automated third party – in this case, a baboon – who then ascertains through a mysterious but undoubtedly rigorous and not at all random process which participant might fit well with another. To date, one out of sixteen attempted couples has permanently mated. The rest continue to visit the baboon; they appear hopeful and only mildly panicked.

To be lonely is to be without company. To feel cut off. Apart.

To be alone, however, can mean to be incomparable. Unique. Separated from others, but in a way that distinguishes you.

How fitting, then, that You alone ensure I will never be lonely. You alone are love.

Amen.
Posted by Julia Rocchi at 9:23 PM No comments:

How to stay married (according to my parents)

Today my parents celebrate their 35th wedding anniversary. For those of you who don't know my parents, this factoid might not interest you. But it should, because my parents provide an excellent example of what real marriage looks like.

As this marital milestone approached, I found myself thinking about how I perceive my parents' relationship, how it has affected my life, and what lessons I can take from them. For example:

But I was observing all these points as the child of a partnership, not a partner in the partnership. So I decided to go straight to the source and find out what it looked like from the inside.

I emailed each parent separately, not divulging that I was asking the other parent the same question. My initial prompt: What would you like to tell (Mom/Dad) that you haven't said to (her/him) yet in 35 years of marriage?

Both responded quickly with nearly identical answers (sign #1 that you've been married for 35 years): 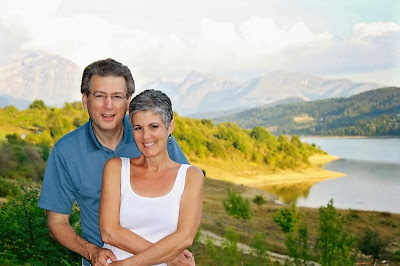 As lovely as these answers were, I wanted more. Back to the drawing board I went, and came away with a second prompt: What would you like the next 35 years to look like with Mom/Dad?

This one went over much better. My mother answered first:

I really liked this question... I think I told you once that when Dad and I were talking about getting married, I had this vivid image of the two of us as very old people holding hands and just being together. I knew then that I should marry him. It’s pretty simple: I want the next 35 years to look like the first 35 -- lots of surprises, fun times that bring us closer, sad times that bring us even closer still, new things to learn, trips to be taken, good food to cook and then eat with gusto, watching you and your brother grow in every way and sharing in it with you, being graceful about growing older, lots of photos snapped of the many important events that will occur, and most important of all -- still laughing like we did when we first met. It is the first thing that drew me to Dad and it is still the thing that keeps me happiest. So, I guess I want to be laughing with Dad for the next 35 years. Pretty simple.


Then my father, who addressed my mother directly:

We are now married for 35 years. This is a long way from our first date when, being the romantic that I am, I took you to see “Bring Me the Head of Alfredo Garcia” by Sam Peckinpah. As I survey what we have done in that time, I know it has been all that I would have hoped and more than I could have dreamed. In the first 15 years, my work led us to live in six different houses. Still, we were always able to build a home for ourselves and the kids in all those locations. We encountered many troubles, yet we never lost our ability to laugh. And as we lived through the same recessions and ebbs and flows that everyone else did over that time, we always felt rich, as we knew that we had those things that matter.

Now I envision the next 35 years, and I see that we’re putting the finishing touches on the foundation of that next phase of our lives. Will we work? Definitely… just not at our current jobs. I picture you as a docent in some appropriate museum, and everyone will be fighting to be in your queue because you will still be so damned pretty. I’ll probably be writing to, talking to, consulting to anyone who will listen to me. I’m sure I’ll be the cute codger who tweets and self-publishes e-books (low barrier to entry on those).

What is most important is that we’ve had lots of practice in the ways we will inevitably spend our time. Taking in the arts, especially running to learn about the next big thing. Singing a cappella. Traveling, whether to keep long-time relationships alive, or seeing something new, whether it is the pyramids, Alaska, or a tango festival. Most likely, we’ll know how to be content with being together.

We know how to build a life, a 35-story building under construction one story at a time through courtship, through our wedding and raising two wonderful children. One story at a time, three decades later, we got to where we are today. And now we are prepared for Maslow’s period of self-actualization. I can’t wait. 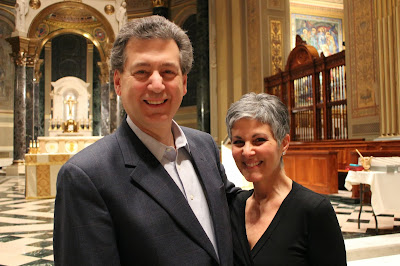 You know what the best part of these answers is, aside from the flirting and lurving and cuteness? The best part is, I knew what they were going to say. Not because my parents are boring and predictable, but because they have always lived their marriage out in the open. My brother and I witnessed tickles at the sink, strained conversations, cuddling on the couch, moments of panic, love notes on Post-Its, bad days, good days, blah days, extraordinary days -- the million points of minutiae that comprise a life lived together.

Now that I'm a grown woman who better understands just how hard relationships are, you better believe I'm taking notes. But for all the critical lessons and important observations, it seems that a good marriage -- according to my parents, anyway -- can be boiled down to six key tenets:


Happy Anniversary, Mom and Dad. Thank you for being the collective YOU. Now get going on the next 35 years, you crazy kids! [Ed. note: XOXOXOXO] 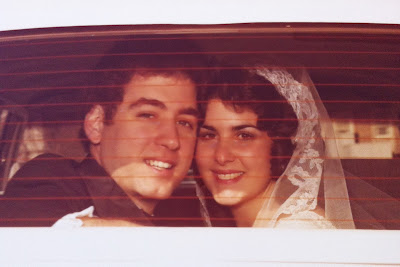 To my spouse, whoever you may be:

Let's build a life, one story at a time.

One inside joke, one special date, one memory at a time.

One fight, one makeup, one crying jag, one sidesplitter, one lesson at a time.

One table, one couch, one move, one home, one animal, one child, one stage at a time.

One card, one heartache, one surprise, one load, one list, one Monday, one meal, one morning, one moment at a time.

Let's build a life, one story at a time, and let's tell it like we mean it.