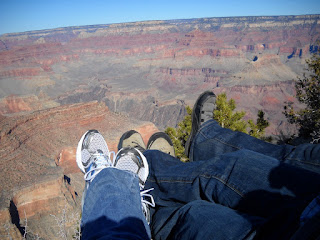 Grand Canyon in feet. Taken January 29, 2011.
From the Grand Canyon Guide to the South Rim:

Often described as Earth's greatest geological showcase, the ensemble of stunning dimensions -- the melding of depth, width, and length -- sets Grand Canyon apart. Nowhere else features such a dazzling variety of colorful rock layers, impressive buttes, and shadowed side canyons. Grand Canyon is the canyon against which all other canyons are compared. [...]

The geologic story is rich in detail and mystery. Attending a free ranger program may move you from wonder to comprehension.

How big was the easel that held Your canvas for the world?

How much did You hem and haw, palette in hand, while billions of years passed below? When You formed the sun and moon, was it with an eye on the variable light they'd cast on Your masterpiece?

You are the only artist I've encountered whose tools move on their own. And as such, Your master work will never hang complete, for the natural world You set in motion edits, shapes, and evolves the art within.

I try my best to record each shifting view. Still, many I miss. Many more I've not even had a chance to see.

But You don't mind; You keep waving and calling me closer. For there are no ropes or lines or burglar alarms here -- simply an open invitation to press my nose against the frame until I pass into the paint itself.