Despite what Coldplay says, God gave me neither style nor grace 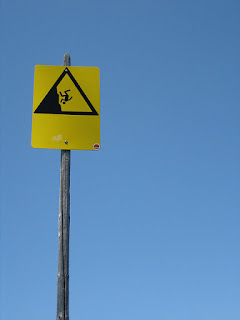 Photo by trevorappleton.
Of course it had to be someone else's photo,
because a) I rarely do mountains, and
b) if I'd taken a picture I would have fallen off the cliff.

I beg to differ with Coldplay: God gave me neither style nor grace.

Otherwise, why then, when I was slated to be in the tap routine for a show, would the choreographers have politely and discreetly cut the number "needed" in half? (I wasn't needed.)

Why then, when I was using on the squat machine at the gym this weekend, would another gym-goer say to me, "Not quite awake yet, are we?" (I was in the middle of a set.)

Why then, when I caught my flip-flop on the slightest raised inch of sidewalk and landed hard on the other foot on my way home from work, would a homeless man call out to me to be careful? (I walk the same route every day.)

I'm really, really hoping -- with all fingers crossed, except with my luck, I'll cut off circulation and lose a pinky -- that this lack of grace will transform to some greater purpose. That I'll have the sort of opportunities only abject awkwardness can reveal, like a lost diamond ring on the sidewalk right before cheek meets pavement. 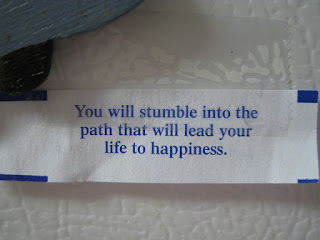 
This better be it. Otherwise, I'm taking out extra insurance.

If I'm going to trip over anything, Lord, can You make it the curb and not my words?

I keep stumbling across the same arguments, the same worries, the same aggravations, the same fears. If there's a high expectation or misplaced assumption around, I guarantee I will stub my toe on it.

You'd think I'd learn. But no. I rush in where angels know better than to tread and consequently fall flat on my all-too-mortal face.

Help me clear the path, Lord. Or at least remove it of injurious debris for the time being. That way I can start making progress down the road, with at least some strength -- and some limbs -- intact.