Run toward the fear 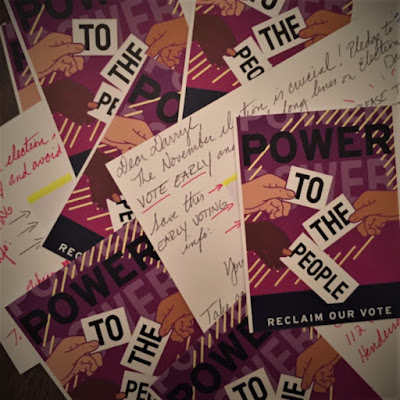 Last week I received my absentee mail-in ballot for November's election, and my first feeling upon opening it was dread.

For the first time in my voting life, I am not assuming a peaceful transfer of power. Instead I am expecting corruption, violence, and protests. I am expecting a total upset of democratic norms, and with it a national rupture so immediate and undeniable that it will alter the trajectory of our history.

Basically, all I have ever taken for granted about our society's electoral functioning is under serious question. So ... yeah. Dread.

Up until 2016 I blithely skipped to my polling station once or twice a year, received my sticker, reacted superficially to election outcomes, and carried on with my life. Such was my privilege of being a white, upper-middle-class voter in an affluent suburb of a major metropolitan area; white supremacy had so inculcated me with reliable comfort that I never bothered pricking the rainbow bubble surrounding me, never questioned how its glossy, shimmering surface might be distorting my view.

This year, however—also for the first time in my voting life—the bubble is burst, and I better grasp the stakes beyond my own existence. Am I still benefiting from white supremacy? Yes. Is our country grappling with whether to allow it to continue? Yes. Do I recognize my moral imperative to pop every shiny, comfortable bubble floating past? God, I hope I answer yes.

This past June, I wrote about how I was turning my lament into commitment to racial justice, and I've spent the time since then learning more about what it means to be anti-racist. One big takeaway: Learning and self-education are valuable, but they are only part of the equation. To be fully anti-racist, you must pair your examination with action and work to dismantle the entrenched systems upholding white supremacy.

So, just as I asked in June, I continue to ask, "What can I do?" Thanks to being a little farther along the winding path, and with more self-awareness and discernment about anti-racism to guide me, I've chosen to participate in this moment of electoral reckoning in two ways: by donating more significant and sustained money to organizations that are fighting voter suppression within communities of color, and by volunteering my time to write letters and phone bank in an effort to increase voter turnout among those same communities.

To be completely honest, giving money is the easy part. The idea of cold-calling strangers in other states, even for a nonpartisan purpose such as ensuring people have the voting information they need, churns my stomach. But as I practice confronting the unwatchable and imagine what real fear feels like for way too many people in America—the fear of not having enough food to feed your family, the fear of not having health insurance during a global pandemic, the fear of losing your shelter due to unemployment, the fear of being separated from your child at the border, the fear of dying at the hands of a police officer—I soon snap out of it.

My "fear" is not true fear. It is merely complacency under threat, and my responsibility as an anti-racist person of faith is to push beyond my own comfort and vote, give, and act in ways that undermine structures of sin and greed, support all human rights, and create a just world for generations to come.

How easy bubbles are to create—a dip, a swish, a swoop—and in the air before us they suddenly float, designed specifically for a moment of fleeting delight, popped with but a poke of a fingertip.

If only we could as easily burst the bubbles we've wrapped around ourselves, iridescent orbs of willful ignorance that look light but weigh us down, circular cells designed for a lifetime of fearful protection.

Help me see my bubble for its true nature: not a window, but a wall. Then help me lift the sledgehammer against it, leaving me shattered but clear-eyed, freer to rise.