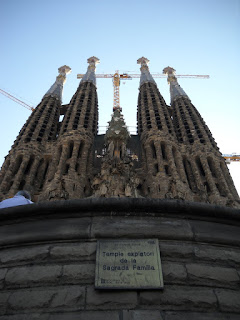 La Sagrada Familia. That's all I have to say. I've been inside a lot of churches in my day, toured many magnificent cathedrals, but never, ever, have I been in a place so full of reverence and faith and exuberance that it moved me to tears and helped me reflect even among throngs of tourists. 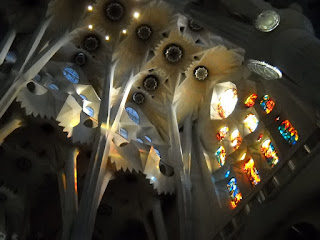 Thank you for your vision, Gaudi. Thank you for connecting humanity, nature, and divinity in such a thoughtful and compassionate scale. The vivid colors, the nurturing curves, the symbology and storytelling in every nook -- you were Catholic and catholic simultaneously. You made me feel what I far too often only think about. I wish you yourself could come back and see it. Would it please you as it did me?

Part of the power of the Sagrada experience was the realization that I was standing in a cathedral in progress. All the ones I've ever toured (except for the National Cathedral here in DC) are ancient and settled affairs. But Sagrada is surrounded by cranes and scaffolding. The inside was only completed and consecrated by Pope Benedict last year. Estimated total completion isn't until 2020-2040. ("Between now and eventually.") 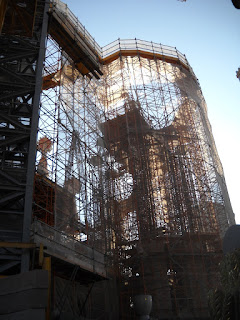 Consider the following: Even with all our modern technologies and capabilities it's still taking us over 150 years to build this temple of God. That staggers me. And I was a part of that flow of time, at least for an afternoon. Someday, I may travel back with my children or grandchildren and say, "I was here when this fully wasn't." What a testament to endurance it is -- what a testament to vision.

Along those lines, I was also blown away by the scope and intimacy of Gaudi's plans. Every inch is accounted for. He brought to bear all his skills of architecture, engineering, sculpture, masonry, coppersmithing, woodworking, storytelling, and more. He laid out meticulous plans, knowing he would not live to see the cathedral to completion. He trusted others to carry them out. I wonder if it made him sad to miss it, or comforted knowing it would live beyond him, or maybe a bit of both. 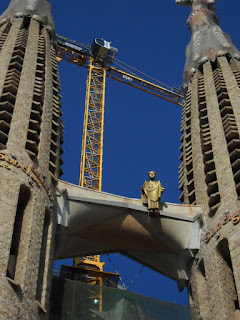 The museum panels later told me that Gaudi was a "devout" believer. He certainly believed in the project, and it shows. The entire building breathes around you. It moves with the earth. Despite its vastness, it doesn't dwarf you, but elevates you. A half-hearted person could not have achieved this miracle. Sagrada is conviction set in concrete.

In the hecticness of the past week, I find my mind wandering back to the sanctuary. The tourists and pilgrims fade at the periphery into quiet wraiths. My eyes linger on the incomplete stained glass. The crescendo of the Lord's Prayer bounces off the curves. I sit in the pew and watch the sunlight chart its course through dusk. It's just as Gaudi designed it, so that neither too much dark or too much light would render the worshiper blind. 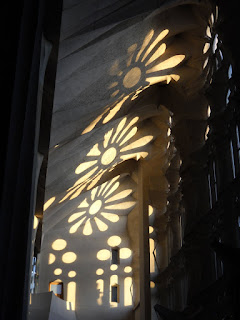 As I wandered through it today, it finally came to me: Gaudi built this temple for rejoicing. It metes no punishment. It wags no fingers. It doesn't seek to smother with grandeur. It's there to guide, and instruct, and above all exclaim. The Sagrada was built with its palms open and its eyes up. It can't stop smiling. No wonder I felt overjoyed in the moment and continue to feel it today, even an ocean away.

But enough of this for now. It's time to sleep, where I can dream of pillars that resemble trees, a choir loft that holds1,000 singers, and a church that was built as a prayer. 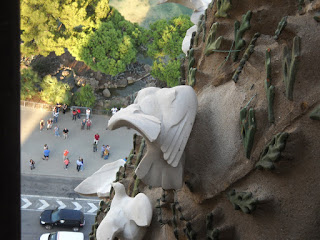 My sanctuary is incomplete. I see chinks of sunlight where the ladders meet rails and shadows from the hefty cranes looming overhead.

I thought I had a plan when I started building. The more I construct, however, the fuzzier my blueprints become. Watchful statues ask tough questions. Higher towers bring deeper thought.

But strangely, I'm not worried. There is no rush, just unrealistic expectations. I will one day arrive at the altar, the pillars will rise piece by piece, and as long as I'm striving for beauty, I can't see how the result could be anything less than holy.