My guardian angel is a videographer 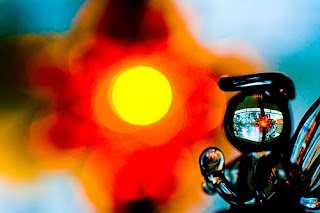 Angels rarely call on the phone. But this one did.

He rang my colleague Jason this past Saturday morning, just to follow up and see how things were going with our homestretch, mad dash, full-on sprint to the finish line for production of Buffalo Unscripted. The guys had bonded earlier in the month over their shared Texas roots and a common AV project. The angel really had no reason to follow up; the previous project was done, and he was not involved in Unscripted in any way. But he called anyway, just because.

His timing could not have been more perfect. Jason was hunched over the editing booth, watching both Macs whirring with his bloodshot eyes, wondering how the hell you make a Blu-Ray disc. The angel knew. He knew quite a bit, actually. And he walked Jason through it, step by step, link by link, taking two hours of his off-the-clock time to help our overwhelmed project leader burn the right thing.

Turns out that the Texas Video Angel (as we now call him) was dead-on in his advice. Yesterday, a mere day from our deadline, Jason successfully transformed our blood, sweat, tears, and incessant giggles of the past six months into a movie theater-ready format.

The Texas Video Angel's interception meant the difference between a pixelated amateur effort and a smooth final product. Better yet, it helped the whole team relax into the excitement we've been bottling up since July out of fear we couldn't realize our vision -- not to mention saved a couple years of Jason's life.

The Texas Video Angel is now the humble patron saint of Buffalo Unscripted. I know what he says is true, because the Blu-Ray worked fine on my player at home. But more than that, he reminds me of one of our project's key discoveries: that people will constantly surprise you for the better.

I hope he keeps watching over us as we premiere our project on Friday. We've received a lot of blessings already -- a couple more would be heavenly.

Update: Just got published on Buffalo Rising with my one word for Buffalo (which happens to be pheNOMenal).

More could be said. More could be tweaked. More could be sliced and diced and reimagined in infinite arrays. But eventually, your vision must toddle forth on its own two legs. You have to trust what guided it to this point. You need to believe in your own ability and stand by what you sought to create.

God, grant us the right kind of the pride -- satisfied, elated, self-respecting. Work well done is work worth celebrating. Help us celebrate it now.