Of Mary and Muppets (trust me, it makes sense) 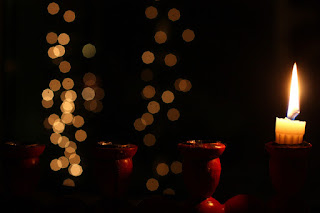 This post is about Advent (mostly Mary). And Muppets (mostly Muppets). And the unexpected thread that ties them together.

At first I thought I was brewing this idea because this past week's highlights related to either entity in some way, be it festooning Fella's front yard with lights or sitting in a movie theater watching furry creatures from my childhood flop across the screen. All happy things, to be sure, but the connection wasn't clear.

Then, in my online meandering, I came across these posts:


As “Mah Nà Mah Nà” climbed the charts, the fledgling Children’s Television Workshop was struggling to settle on a format for their educational TV program, Sesame Street. CTW co-founder Joan Ganz Cooney had recently given the OK to bring in Jim Henson, whose Muppet characters had at that point been seen only in commercials and on variety programs like The Ed Sullivan Show. Henson, a bearded bohemian with no experience in children’s programming, was something of an odd choice, but that was just why Cooney wanted him.

Mahna Mahna, as the character would come to be known, made his televised debut on Nov. 27, 1969, during Sesame Street’s first season. [...] In Street Gang, Michael Davis’s history of Sesame Street, several of Henson’s colleagues describe his artistic style as “affectionate anarchy,” and it doesn’t take much in the way of exegesis to see an anti-conformist message at work here. As Mahna Mahna’s antics grow wilder, the Snouths grow more uneasy and eventually counterattack, smother him with their bodies. But Mahna Mahna eventually breaks free and runs right at the camera, making contact to the sound of shattering glass.
-- Sam Adams, "Mahna Mahna," Slate


... I imagine a Mary who would look me in the eye and tell me to get my shit together... with love, but also with a gleam in her eye that would let me know she was serious and would open up a can on me without a moment's hesitation if necessary. I imagine Mary with a firm jaw, saying "Yes, if I could bear the Son of God, bear the shame of my pregnancy and all of the difficulties with and questions around raising Him... and then watch Him die, then you can handle what God places in your life." I imagine a Mary who even now says "that's not too trifling a problem for me to take to God for you. Hold on, I'll be right back." I imagine her tough and strong and a little weathered. She was a carpenter's wife, after all. It's not like she had it easy.
-- Amy Moffitt, Hail Mary, Bad-Ass Queen of Heaven


That's when I was able to pin down the elusive thread: The most unexpected people take unexpected action to achieve unexpected outcomes.

Think about it. Both Jim Henson and Mary were unlikely heroes in their respective contexts. They were on predictable paths until the powers-that-be asked them to do something beyond their ken. Their subsequent actions revealed their non-conformity -- Henson through his artistic vision, Mary through her decision to stick by her "Yep, it was God" story for over two millenia.

In a way, you could say that Mary pioneered 'affectionate anarchy.' Sporting a pregnant belly out of wedlock was not a subtle pronouncement. It was direct, defiant, and courageous. The result, however -- a child -- was a universal human experience others could understand and rally behind. (Much like how we TV viewers bought wholesale the idea a talking frog playing a banjo in a swamp. Because we all got that it's not easy being green.)

Strange comparisons to Jesus and Kermit aside, consider this: Advent is, by definition and design, a season of expectation. Yet its principal players -- and more broadly, its reason for being -- are any thing but expected. So, in honor of this dichotomy, let's stay open to the pleasure of surprise this season. For whether you prefer Maranatha or Mahna Mahna, there is always room for wonder.

I grew up knowing you would come

once we'd picked the turkey clean
and scrubbed the windowsills,

once we'd watched the pink wax drip
and arranged the figurines,

and had in every way prepared for you.

But only now, grown up, I see
that you were there before the chores
and will be there long after

and for that wonder
I was unprepared.