Well, I *could* change, but that would require work. 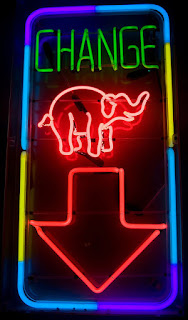 I should really listen to myself more.

I knew I wanted to write about change this week. Earlier this fall, my workplace underwent a not-insignificant reorganization. Our vision, our operations, and our staff are in a state of reinvention. And it's in transitions like this when you discover/remember/wonder what you and others are made of.

For example: I fancy myself a smooth agent of change, someone who stays calm amid crisis, takes the long view, errs on the side of optimisim. This is a very generous and perhaps delusional view. Because I also get knots in my stomach when people are unhappy. I soak up others' stress (as if my own weren't substantial enough) like a sponge on steroids. I bought a bottle of Chianti earlier this week just for myself.

Put down the phone. I didn't drink it in one sitting. I just wanted to.

Now that we're a couple months into the reorg, I'm questioning how well I roll with the punches -- and how much better I could roll with them if I put my mind to it. Which is why I wanted to write about change this week. And also why I procrastinated heavily, because I didn't want to spend yet another hour in my own head thinking about such sticky matters.

Until, that is, I remembered I have already written about this very thing. Over three years ago, in fact, when I was still living in Philadelphia and undergoing my (first) quarter-life crisis.


Spare change. Noun. The coinage and assortment of other small metal objects found in pockets/couch cushions/tip jars around the world.

Now try this on for size: Spare change. Verb. To use life's shifting events frugally or carefully. To avoid the full experience of new decisions or circumstances.

Or this: Spare change. Adjective. Bare, as referring to life. Lacking in amplitude or quantity. Plain, unembellished, and just plain boring.

Do you really want to spare change in your life? Do you want your picture next to these definitions? Ariane de Bonvoisin wants to make sure both your answers are NO.

She and her book -- The First 30 Days: Your Guide to Any Change (and Loving Your Life More) -- were the subject of a Guy Kawasaki interview earlier this week that caught my eye in my RSS travels.

Maybe my own recent life changes were still fresh in my mind. Maybe two separate conversations with my Philly BFFs about new directions and doubts kickstarted the train of thought. In any event, I read the article, and discovered the nine principles that make people good at change (straight from Ariane's mouth):


1. They have a positive belief about change and are generally optimistic. I call these people "change optimists."

2. They believe in the change guarantee: that something good always comes from change.

3. They know that they possess a "change muscle"--that they are strong, capable, powerful, and intuitive enough to handle any change that comes into their lives or that they want to initiate.

4. They refuse to become paralyzed by "change demons"--negative emotions that arise during change.

5. They don't resist change--choosing instead to accept the reality of their situation.

6. They understand that their thoughts, the words they say and the feelings they allow themselves to experience during change have a direct affect on how easily they move through the transition.

7. They believe that life has a deeper meaning than what can easily be seen or felt, that something greater is at play, and that no change is arbitrary.

8. They surround themselves with a support team to help them move through change.

9. They refuse to get stuck during change. They keep moving and take care of themselves mentally, physically, and emotionally.


You can view these principles through a few prisms -- spirituality, pragmatism, philosophy, and so on. Whatever your context, though, the truths remain the same. Change happens to you, within you, and through you. All three steps must be present for change to succeed.

So don't be stingy with change. Grab it, gulp it, glory in it. Otherwise, the only thing getting lost in the couch cushions will be you.


Ah, to be so young and wise again.

But really, I think the point still stands. I can hide under the bed for the rest of my life, or I can go step by step in supporting myself through every transition, major or minor, that life delivers.

Change is, after all, inevitable. Let's not just roll with it -- let's make the most of it.

Be the river, said my friend, by which he meant go with the flow, adapt, and any other number of calm and soothing water metaphors.

I think he forgets, however, that rivers can rage. They freeze under winter's grip, choke on melted snow, explode after summer storms, even gasp for air in arid seasons.

I'm only the river in that I react more than I control. I don't know what rocks lie in my path or how fast the current flows or where my destination rests. At best, I reflect the sunlight when it reaches me and absorb the raindrops when they fall. And always I move forward, drawn by a pull set long before I joined the earth, on a course that will persist long after I depart.

Still, I'll be the river, God, not because I have no choice, but because You have given me power between the banks: fluid strength, coursing energy, and the ability to heal myself in time.