Why I will never achieve my resolutions 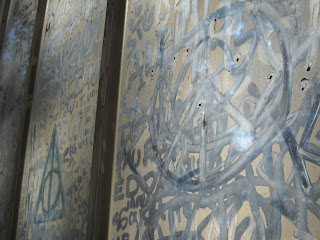 Way back on January 1, 2009, I wrote a post about the one resolution you can't live without -- not my own, but rather the overarching truths and lessons of goal-setting, what it means to truly resolve.

Each year since, I have written a litany of earnest resolutions and attendant goals in my journal, and they're often the same items. Every year I tell myself to make more time for writing. Every year I say I will travel to new places. Every year I vow to be a more loving person.

And every year I think I have failed.

But the march of time -- in this case, at least -- has been kind. The wise idea I presented in 2009 came from a place of intellectual understanding, and now, finally, after three years of the DC circuit and friends' deaths and interrupted sleep and tiny victories only I can see, I understand the concept emotionally too.

You see, I haven't failed. In fact, in many of my goals I've made significant progress. I write the same things each year because those things -- creating, exploring, relating -- make up who I am. So I'm never going to 'finish' or 'accomplish' them because I live them. They will always be part of what moves me across this earth.

This year, I identified my 2012 resolution three months early in the midst of a punishing travel schedule. "Stay put," I said to myself. "Go away less, leave more time for writing, and don't burn yourself out. That's it. Let everything flow from that."

I felt smug about my proactivity at the time, but now I think I spoke too soon. My beautifully still December -- spent in my own home in my own routine -- gave me ample time to examine where I stand, and it boiled down to a few themes:
So my resolution has shifted to 'just do it.' It's not even a resolution at this point, more of a mantra. Because why wait? Why stall? Why miss out? Make the planets align where you can, and move on when they don't, or won't, or shouldn't.

2012 is my year to keep plugging away at ever-moving external targets and ever-evolving internal ones. My success is assured for next year, because the goal is to live. That much I know I can do.

I think, though, I've arrived
at a rest stop where others
have paused
because I see their scrawls
on the bathroom walls
and they all say
"keep going"
"you'll learn"
"we promise"