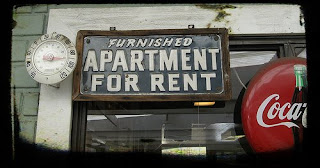 Photo by turkeychik
There is a stranger in my house.

She's about 5'6", brown hair, 22 years old. I have known her for one week. She sleeps down the hallway. She shares my shower.

Who is this woman, and why is she in my house? This stranger is my summer subletter, and I let her into my home because of the strength of her emails.

***
About three weeks ago, I posted an ad on Craigslist looking for a summer renter. I outlined the location and rent. I listed the amenities. And I gave some fun personal details about me and Jacob (we like to cook, hike, watch So You Think You Can Dance) to give people an idea of our personalities and dispositions. In my view, it was straightforward, informative, and friendly. Nothing more, nothing less.

Not 12 hours later, responses started pouring in. And it wasn't long before I was experiencing the strange, slightly off-putting sensation that people were responding as if I'd placed a personal dating ad, not a less personal "roommate needed" post.

Many of them opened up about their desperate need for a place fast, their desire to join us on all our activities, and their own interests and goals for the summer. In fact, I had to battle my urge to write some of them back and say, "Hey, the room's taken, but you sound really cool ... let's hang out when you get into town!"

What was so compelling about these responses? What qualities were people exhibiting through words alone that made me want to allow them into my home? And whatever the answer was ... how could I bottle and sell it to anyone who ever needs a room, a date, or a job again?

Ok, so it turns out I can't bottle it after all. But in answering the first two questions, I can offer up some observations on what characteristics defined the successful personal pitches.

* Be real. People who introduced themselves at the email's start created an immediate identity in my mind -- and proved they weren't a spam autoresponder. Plus, an extra sentence or two about where they were from or what they did for a living gave me context about their place in the world and helped me connect with them emotionally.

* Share what you'll offer me. Strong candidates got my attention when they talked about how clean, quiet, and responsible they were in the first or second breath of the email. Bonus points if they were specific about which dates they needed to move in and out. The clear losers were ones who talked about only what they needed and how I should give it to them ASAP.

* Refer to details in the ad. The strongest responses played up how their interests aligned with mine and Jacob's. Most people shared what reality shows they like to watch, or talked about what dishes they liked to cook. But the most fascinating people were those who built off my very simple list of interests, and wove it into a story that showed insight into their personality. The clear winner of my heart: the girl who told us how she had just hiked the Inca Trail and loved her travels in Peru ... not even knowing that I'm planning a trip to do exactly that right now.

* Give me a way to follow up with you. It seems so common sense, but quite a number of respondents did not give me any other way to contact them (beyond the email address they wrote me from). Granted, I didn't feel the need to call any of them, but it seemed impersonal at best and cagey at worst. Either way, the oversight didn't inspire my confidence in them.

* Don't be pushy. One guy who came to see the house spent his whole tour telling us how badly he wanted to live here (but then said he was only willing to pay rent at $100 less that we required). He also accused me of poor judgment by not accepting him on the spot. Lastly, he called me multiple times that morning to check on the room status and, upon finding we had offered it to someone else, huffily told me he was glad he hadn't waited on me. This young man is now less-than-affectionately referred to around here as Mr. Jerkstore.

* Be clean, neat, and punctual. Another young man who came to see the house arrived over an hour late, clearly hungover, unshaved, and wearing ratty clothes. This all raised immediate alarms about his ability to clean the kitchen and pay rent on time. Needless to say, we did not contact him or hear from him again.

* Show your interest by having additional questions prepared. One gal we met in person finished her tour of our four-story house in three minutes flat. She did not have a single question or offer one piece of personal information. The girl who's now in the room, however, went back and forth with us several times through several layers of details about the house. Her questions were thorough and sophisticated. These revealed not only her understanding of mature living needs and relationships, but also that she cared enough about the opening to actively pursue it.

* Go the extra step. Here's the kicker: We never met our subletter in person until the day she moved her stuff in. We were so impressed with her over email that we didn't feel the need to have her over (plus she was out of town). What sealed the deal? When she offered up her current roommate -- unbidden by us -- as a personal reference. The roommate had only glowing things to say. Bonus: when I referred her to our landlord to get a question answered, and she called him within the hour. On a Saturday. In the morning. That's dedication.

So now the stranger is in my house. She has a set of keys and stores food in the pantry. And she doesn't have to worry about living in a rathole for the summer, paying beyond her means, or rooming with depends on how you define crazy people. Why? Because she did all the right things, with all the right results.
Posted by Julia Rocchi at 10:32 PM