Bear with me: A camping story

It's now been almost two weeks since the Great Camping Adventure of '08, and I'm still scratching bug bites and nursing a burned finger -- not so badly burned, though, that I can't forever commit our adventures in the wide outdoors to the worldwide web.

And since we behaved like children most of the time, it's most fitting to share this saga in story book fashion. Cuddle up -- here goes!

Once upon a time, there were four friends. 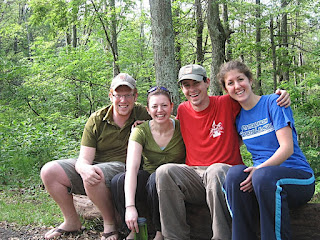 They decided to test their friendship by spending two days together in the woods. Their goals: to see a bear, but not get eaten by it.

So off they went in their heavily packed car to Shenandoah, a place of unparalleled natural beauty and assorted woodland creatures. Along the way, they stopped at Wawa. The native Pennsylvanians rejoiced.

When they got to the campground, the mosquito-infested campsite near the bear path that they originally picked turned out to be reserved. Few tears were shed, especially when the camp host pointed out the timber rattlers. Instead, the intrepid crew moved to a lovely wooded spot around the bend, populated mostly by deer and obnoxious lute players from a couple camp spots over.

A fire was soon started with flint. There was much excitement over this feat of flame mastery. 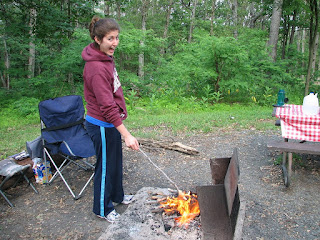 A delicious dinner of silver turtles and a couple hours of Bible School songs followed. The first night in the so-called "tent of sin" was (disappointingly) sinless, though a bad case of tent giggles did ensue.

The next morning saw a grand adventure -- cooking pancakes. Some of the crew proved adept at this; others, not so much. Soon, though, all pancakes were consumed and the merry band headed first to see Stony Man, then to the trail for a day hike.

The hike was going splendidly -- with sightings of deer, bridges, waterfalls, outlooks, and places to pee -- until lunch. At that point, the crew decided they were going to take a different route back "to enjoy new scenery." This turned out to be a grave error, since the end of that route consisted of climbing 2100 feet in the space of 1.25 miles. 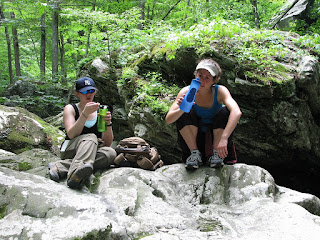 However, all was not lost (just feeling in our kneecaps). The new route provided ample opportunity to use iodine tablets for potable water; carve walking sticks; watch for bears; and take a dip down a natural rock side mercifully positioned halfway through the hike from hell.

After what seemed like a long while and countless cries of "just 15 more minutes!," our brave crew parted ways, with the stronger ones retrieving the car and the blinded-by-pain ones taking their sweet time. It was at this juncture that the unthinkable happened:

We saw a bear.

And we knew it had all been worth it.

We celebrated our bear sighting victory that evening with hot dogs, baked beans, and pain medication (read: alcohol) around yet another spectacular fire, hardly dampened by a sudden thunderstorm. This revelry was followed by swift collapse in the tent of sin, and a long, dreamless sleep (which prevented your author from realizing she was on a rock).

The next morning, the adventurous crew arose to a fine Sunday morning brunch and a quick decampment. Before they knew it, they were back in the car and are on their way home (read: back to Wawa). They even had time to fix a broken radio fuse. That's how resourceful this group was.

By the time they arrived home, the burns/scratches/aches/rain/woodsmoke/blisters were forgotten, and all that remained were the sweet memories of becoming one with nature and closer to one another. Not to mention (not) pooping the woods. And the gun shack uncomfortably close to the child care learning center.

If we need to start a fire, we can burn The New York Times -- that rag. But not the Style section. We can keep that.

My great-aunt and my grandmom got kicked out of Friendly's.
For what?
For fighting. 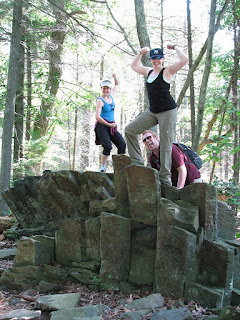