This I Believe #6: Why You Should Date a Girl With Cooties 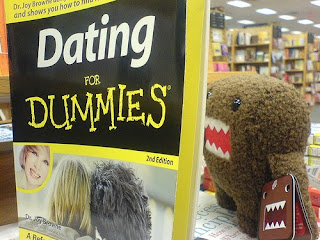 Photo by ZakVTA
Sixth installment of my unofficial This I Believe series.

My open letter to all the boys I haven't kissed yet worked. One showed up. And he really does want to kiss me.

In fact, this long-distance fella signaled his intentions several ways. He made the first move (and then the second, when I was too oblivious to pick up on the first). He introduced the terms boyfriend/girlfriend into our conversations. He even talked about coming to DC next summer for his internship so we try out living near one another.

Note: Summer is a whole SIX MONTHS away. He's planning for me. Cue swoon.

But amid the giggliness and excitement, I have a problem: me. Because somewhere between college and today, I caught cooties.

Cooties, as you may remember, refers to a mysterious, non-medical "infection" that inhabits the opposite sex. Anyone affected is presumed undesirable and untouchable. You save yourself by staying as far away as possible and pointing fingers across the school yard.

I contracted cooties after my first (and last) serious relationship ended sophomore year of college. That time of life brings a great deal of self-discovery, and mine collided headfirst with young love. The former walked away with minor scratches; the latter ended up in traction for seven years.

With love and its cohorts (emotion, vulnerability, connection, etc.) so laid up, I was free to focus on other important things, like figuring out who I was, what I stood for, and what I wanted my life to mean. I earned my own paycheck. I made my own decisions. I matured.

That's when the cooties moved in, keeping dates and boys and other such romantic attachments well at bay. Not that I minded (much). My cooties were excellent arbiters of personal taste: They sent incompatible men packing to the other side of the playground, and invited the similarly infected over.

But what happens now that someone has crossed into the red zone? Does he really know the extent of my cootie infestation? Will it intimidate him if he finds out? Should I get rid of them?

I hope not. I like them. They're tiny yet immense. They whisper or shout, depending on how I need to hear them. Their presence means I'm never alone -- instead, 30 million intimate friends surround me, each reflecting and refracting an infinitesimal part of my unique DNA.

No, the cooties stay in the picture. We're going to experiment on how infectious they really are. And a big thank you to my new fella for his willingness to participate in this groundbreaking study. Such a venture takes courage, optimism, confidence -- the very stuff, in fact, that cooties thrive on.
Posted by Julia Rocchi at 10:58 AM

Email ThisBlogThis!Share to TwitterShare to FacebookShare to Pinterest
Tags: Men, Relationships, This I Believe