How to reverse the downfall of the American man 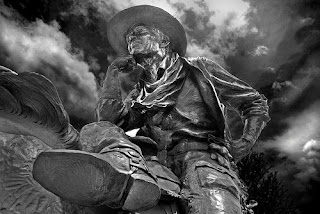 We all know the manly archetype: the cool, calm cowboy, hat pulled low, hand resting on his holster, with one eye on his horse and the other on his woman. It's one of the more romantic images of the tough, red-blooded American male ... and also one on the verge of extinction.

So says author Guy Garcia in his new book The Decline of Men: How the American Male Is Tuning Out, Giving Up and Flipping Off His Future. Procrastination Twitter led me to this Ad Age interview, where Garcia discusses his book's main themes. Among them: women's increasing competence (and numbers), lack of strong masculine examples in media and society, and the need for a new kind of man.

This last point in particular gave me pause. Here's what Garcia had to say about it in the interview (my emphasis):

The new kind of man will take many shapes and forms. That's what's new about him. We know that the old, rigid definitions of manliness are outdated and dysfunctional. Men can no longer hammer women -- or the world, or each other -- into submission without ramifications. That game is over. It's time for us to resurrect the masculine virtues that are much older than modern society: compassion, generosity, loyalty, modesty, humility, farsightedness, curiosity and patience.

As such, I think Garcia's points are a little overblown. What he terms as a disaster route to extinction, I see as growing pains. Yes, men's roles are changing in society. But they're not necessarily changing for the worse.

What's happened is that the masculine stereotypes (good and bad) Garcia cites in the interview have come back to bite the gender. Their long-cherished structures no longer allow for individuality or flexibility -- exactly the traits what women fought for in their equal rights struggles.

Indeed, look at what women achieved with the feminist movement, based on the belief that women could do anything they wanted beyond stereotypical gender roles. It wasn't that they HAD to do everything that men did, or do it better. Rather, they worked to have every option available to them, and then enjoyed the freedom to pursue what best fulfilled their personal humanity. Now, men have to work toward that same destiny.

This might lead some of you to think I'm advocating a masculinism movement. I'm not. Women were unequal for centuries; men have felt like they're in decline for at most the last 60 years. The reaction must be proportional to the action. So a revolution isn't needed. Acceptance is.

I have a progressive father, a Millennial brother, two male roommates, and scores of other compassionate, generous, kind, courageous men among my friends and relatives. They are examples of all that men -- indeed, people -- can be.

So when I look at them, I don't see the decline of the American male. I see the rise of a stronger, balanced, understanding society. And if the rest of American men follow their lead, we should prepare for a much more positive interpretation of the phrase "be a man."