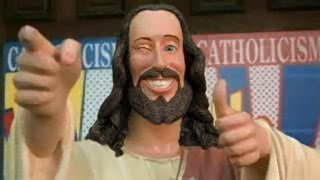 I love you, Jesus, but I don't always like you.

The idea of you, yes. What you stood for, yes. But when I think about you as a man, human, person -- a (sorta) regular Joe -- my imagination fails me. And that makes me not like you. Because I'm challenged to understand how you could be in the world but not of it. And I'm annoyed that you managed to do it quite well.

The truth is, acknowledging you as human puts too much pressure on me. Because you somehow escaped the human condition despite being fully human, and I didn't. So why compare? Why try? I'm already in your dust.

Let's be serious: I just don't have that level of self-control. Or compassion. Or humility. End of story.

I won't give you that satisfaction. So there. Take THAT.

Amen to that, says I ...
Email Post
Labels: Prayer