When Twitter was down: A 12-step plan to social media recovery 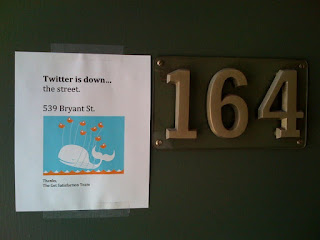 Photo by monstro
Last Thursday, a random cyber-warrior fighting in the digital ether unwittingly staged an intervention. For me. From Twitter.

I didn't even know I had a problem. Yet when my browser and Tweetdeck and bit.ly all said I couldn't connect to the hijacked site -- for a whole business day -- I almost passed out.

It was then I had to admit my powerlessness. I had to face the truth.

"Hi, my name is Julia, and I am a Twitter addict."
Such a dark time, a frightening time. The good news: After the darkness came enlightenment. Removing the source of addiction taught me some valuable lessons about the tool and how to approach it with greater balance, so that I don't run frantically into my boss's office again shouting, "Twitter is down! Twitter. Is. DOWN!"

So here we are -- the 12-step recovery plan for Twitter addicts, wherein we don't rid ourselves of the medium, but learn to live with it.

1. We admitted we were powerless over a system we believed we should control -- that our feeds had become unmanageable.

2. Came to believe that methods greater than ourselves -- sending an email, picking up the phone, walking to the next cubicle -- could restore us to sanity.

3. Made a decision to turn our will and our lives over to the vagaries of offline existence as we understood it, not just our online activities.

4. Made a searching and fearless moral inventory of ourselves. Why are we really using Twitter? For glory? Knowledge? Voyeurism?

5. Admitted to ourselves and to another human being (usually a coworker or confused roommate) the exact nature of our wrongs, in that we had lost the inability to converse beyond 140 characters.

6. Were entirely ready to have the Internets remove all these defects of character by never turning on again, and show us the sun would still rise.

7. Humbly asked the Internets to believe we could remove our shortcomings, and please turn back on again.

8. Made a list of all followers we had not communicated with, and became willing to make amends to them all.

9. Made direct amends to such people wherever possible, such as by going out to lunch or calling them up, except when to do so would injure them or others by forcing them to confront their own addictions to social media and a gross inability to go anywhere that wasn't in front of a screen.

10. Continued to take personal inventory and when we were wrong promptly admitted it, such as when we Tweeted through FriendFeed instead of through Twitter.

11. Sought through reflection and meditation to improve our conscious contact with the "real world" as we understood it, asking only for knowledge of how best to discern what's worth sharing (questions, articles, wisdom) and what's not (breakfast choices, bathroom habits), and the power to carry that out.

12. Having had a spiritual awakening as the result of these steps, we tried to carry this message to other Twitter addicts, practice these principles in all our affairs, and show them that life does go on outside of microblogging's sphere.

And indeed, life did go on. I wasn't fired, I didn't ruin friendships, and I managed to make it through the day intact. But for all the tongue-in-cheek steps above, I realized two tell-tale things about my Twitter use.

Wait ... less? How could I be less productive with such a purported time-suck no longer tempting me?

Turns out that for me, the mere fact of Twitter -- its content creation, bursts of inspiration, ongoing conversation -- have become such a part of my routine that the inability to contribute caused more distraction and stress. And it also caused me to waste inordinate time trying to troubleshoot and fix the situation to alleviate said stress, instead of simply moving on.

That led to my second eye-opener: Though everyone was joking about "oh, what inanity lost" when Twitter was down (even leading to the hashtag #whentwitterwasdown), I didn't want to move on. I missed the facetime and familiarity. I missed the chatter. I missed the ideas.

And indeed, when I signed back in that evening, when all was fixed, I was able to congratulate a former colleague on her engagement, offer condolences to a respected blogger on her father's death, and send out a note encouraging help in raising malaria awareness ... all in under two minutes. No wonder I breathed easier. My itch to connect was scratched.

So deride my Twitter fixation all you want. Enjoy the ridiculousness of the 12-step Twitter program. Decry the whole system as shallow, fleeting, or inefficient.

All I know is that more of my interest and creativity is wrapped up in this flighty tool that I previously knew. And like all sustaining things, I will use Twitter in moderation so that it enriches -- not dictates -- my life.