Acting for good: How hambones can change the world 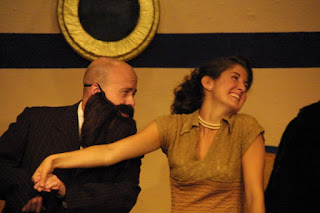 So being a cat on a hot tin roof didn't pan out in November ... but I may just get to be a psuedo-Capitol Step instead. And not only might this new gig satisfy my need for lights and grease paint, I can help do some good while I'm at it.

I'm talking about auditions for Hexagon, DC's "only original political satirical musical comedy revue." (Yes, that is the tagline.) This long-standing Washington establishment is an all-volunteer, nonprofit organization with open membership.

The amazing part is, each show is completely original. That's from the writing to the composing to the performing to the designing to the playing to the staffing. Which means that many talented people come together every year to flex their creative muscles and develop a never-been-seen (and probably not-even-imagined) *TWO HOURS* of original material.

Trust me, this is a LOT.

But here's the part that really convinced me I was meant to try out: All proceeds from every Hexagon show are donated to a Washington metropolitan area charity. Special fund-raising activities and souvenir sales increase the amount of money donated to the designated charity.

Talk about a triple-threat. Writing, stagecraft, AND charity? Surely, I have died and gone to community theater heaven.

So, in an attempt to match their triple threat with my own theater ninja skillz, I headed to the first day of auditions this afternoon to at least not embarrass myself wow them. Some items to consider:

ITEM 1: I was the only auditionee for the first 30 min. or so. There were 20 volunteers.

ITEM 2: My nervous tic used to be a runny nose right before I sang. Now, my nervous tic seems to be a sudden and uncontrollable shaking in my right knee. This is inconvenient during an AUDITION.

ITEM 3: One of the optional fields on the audition sheet was to write a limerick. That's how I knew I was among my kind of people. Here's what I wrote: In a time of transition and change / It's best we all show off our range / To prove we can move / With the president's new groove -- / All the better if we're slightly deranged!

ITEM 4: The production staff and volunteers were among the most friendly, warm, and reassuring folks I've ever had the pleasure of meeting at an audition. Missing the chance to get to know them better is what will make me saddest if I'm not cast.

As for my actual tryout, my singing and acting components were respectable, as I knew they would be. But then came the dancing. Oh, the dancing. It's my Achilles heel. And knee. And both legs.

Let's have a reenactment. Here's what the choreographer said to me:

No worries, this is much harder than anything we'll do in the show. We made it a little tougher this year to identify the best dancers. Once you get it in your system, it's much easier to do to faster music. You probably want to wear your sneaks rather than the character shoes -- I worry about ankles! Now you step, 2, 3, 4, pirouette, chasse, pas de bouree, hip roll, a little something I like to call the Hexagon pose ...

And here's what I heard (on top of my distracting inner monologue that was running its mouth along the lines of oh sweet lord what have you gotten yourself into run don't leap RUN what makes you think you're capable of this feign a sprain FEIGN A SPRAIN!!!!)

Better worry, this is harder than anything you'll do in your life. We did this just to weed out uncoordinated klutzos like you. I have no faith that you're able to do this at any speed, forget about regular tempo. And for the love of god, put on your sneakers -- who do you think you are, prancing around in character shoes like you know what you're doing! Now step, 2, 3, 4, act like a ballerina, sashay, do this modified grapevine thing, shake your booty, strike a pose ... oh, I give up.

And just like that I was done, fates thrown to the wind, awaiting the final decision come next Tuesday. We'll see what happens. In any event, it's always an adventure to put yourself out there, meet fellow creatives, and learn what magic people are concocting just a few Metro stops away. I'll let you know how it all turns out!

* Top photo is me as Hope in Anything Goes at Skippack Playcrafters Theater. Just to prove I am indeed a ham.