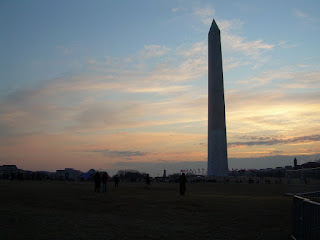 Sometimes, you need to put the computer aside and really LIVE the events that are shaping your life, your country, and your future. Yesterday was one of those days, as Barack Obama was sworn in as our 44th president.

I don't need to tell all of you what significance this day carried for America. Or young people. Or the African-American population. Or the world. Those stories have been played out across all major media outlets ad nauseum for weeks. I can only tell you what it meant to me -- one young woman standing on the Mall among millions, forgetting she was freezing because history was unfolding.

My first impression was the miracle that is this country's peaceful transition of power. Even though our last president was unpopular, the worst that overwhelming crowd did was boo. BOO. In other countries, there would have a coup, assassination, and/or civil war. I counted my blessings.

Also striking was the crowd's mood. The unabashed jubilation of election night wasn't in such full force. Rather, it had evolved into a deeply joyful, contemplative, and solemn feeling, mingled with relief that yes, this day was not a mirage, and yes, it had finally arrived.

Moreover, everyone was expressing optimism and faith. At times I felt like I was in a church service, with people around me shouting "Amen!" or responding to the points in Obama's address. Clearly, we all knew what was at stake. If nothing else, Obama has spent the last couple months setting realistic (and sobering) expectations about the state of our nation. But he's done it with hope and practical planning, and the Mall audience was responding in kind.

I also thought about how all my years as a voting citizen were spent solely within the Bush administration. There, I believe my personal interests were neither represented or respected. Now I look forward to an administration more in line with my beliefs and values, and one that understands the impact (positive and negative) its actions are taking on my generation.

The biggest takeaway from yesterday's inauguration, however, was my full grasp of what it's like to be PART of history, a witness to it. For the first time, I was THERE -- the mythical, magical place in the space-time continuum that makes you an unspoken footnote in the history books.

No one could pick my face out of that crowd. No one in his administration will never thank me by name. No one knows what I intend to do with my renewed sense of optimism and energy. But I do. And I also know I can -- and will -- use it to shift the course of human events in my own small way.

Though I can't go back in time and put all of you there with me, I hope the following slide show takes you through my experience. This is what it looked like 30,000 feet back, folks -- and let me tell you, the view was spectacular.

NOTE: Click on the lower right corner to blow the screen up full-size. Then, click on "show info" in the top right corner of that screen to see my titles and captions for more information.

A final thought: Jacob sent me an e-card today with the caption "We can finally stop pretending we're Canadian." Amen to that. I'm eager to reclaim my new city and return to business as usual. My sleeves are rolled up. But I'm even more excited to regain our class and dignity as leaders of the free world. It is time, and we are ready!
Posted by Julia Rocchi at 9:35 PM