Live from ServiceNation: A new era of service begins! 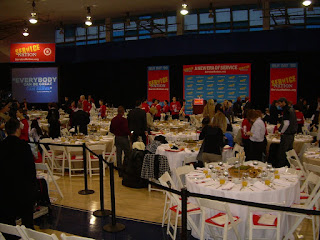 Good morning everyone, and welcome to my live blogging from ServiceNation's New Era of Service breakfast! We have already seen about 300 volunteers (what it feels like anyway) and Ashton Kutcher and Demi Moore. And I'm eating quiche and drinking orange juice.

1. I'm focusing most of my coverage here with an occasional tweet (handle:@RocchiJulia). We can't seem to find a hashtag for the event, so we're using #mlkday if anyone's interested in finding other applicable tweeters.

2. Here are aaalll the media channels where ServiceNation coverage will be available. I said it before at the New York event, and I'll say it again now: I am majorly impressed by their communications strategies and platforms. They do a great job of getting their message out and meeting people where they are.

Please note we will be vlogging live and our player can be found on the bottom right of http://www.servicenation.org.

3. And last but not least, a reminder that Susannah will be live-Tweeting the event (her handle: @suslane). She's also taking pictures with her AWESOME spy-like camera, so look for a follow-up post at Color of Happiness in the coming weeks.

In fact, here's our fair blogger below at her first media check-in! (I'm so proud.) 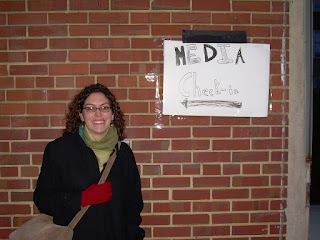 8:05 AM: Waiting for the program to start. I'm reflecting on the words of Martin Luther King Jr. (which is also the rallying cry for today's event):

8:10 AM: We're watching an inspiring ServiceNation "We Are Ready to Serve!" Video. Watch it live stream at ServiceNation website, bottom right.

8:15 AM: Martin Luther King III is speaking. He's "excited because America's excited; we're at a new juncture." He says we have a lot of potential in this country, and that we have a responsibility to foster our youth.

He's also reflecting on what his mother and father would think of what MLK Day has become -- probably would be awed by how widespread the service in. For all that, though, he says his father would also find the billion people living in poverty unacceptable, and say (rightly) that more needs to be done.

"We are here ready to serve because we know what we're doing is right."

8:19 AM: Founder and CEO of Service Nation Alan Khazei is making his opening remarks. He refers to Martin Luther King Jr. as the "patron saint of the service movement" for his ideas and acts. Also neat: He gives a shout-out to Gerald Jimenez, winner of the Case Foundation's Change Begins With Me initiative!

"We have more citizen leadership than ever before thanks to all of you ... we all must double down now and seize this moment, or else it will pass us by."

The goal: work with the new First Family and encourage strong bipartisan support in Congress to pass and fund new service legislation in the first 100 days. "We cannot afford to turn people away who want to serve."

8:27 AM: Good form, Target Foundation! They're donating $25,000 to Ballou High School in gratitude for the school's help and hospitality with this event. (Sorry, link to the foundation seems to be blocked by the school's filters. Visit http://target.com/community for more info.)

8:32 AM: Artie Duncan, the new U.S. Secretary of Education, has just taken the stage: "It's about more than education, it's a fight for social justice."

Side note: I wonder if all the speakers compared speech notes pre-event. There's a lot of quote and call to action repetition here.

1. Make it easy for volunteers to find opportunities and log hours online.
2. Bring in businesses as partners
3. Unite different communities through service.
4. Talk service early. You're never too young to learn about or participate in service.
5. Work with federal level as well.

U.S. Rep. George Miller (D-CA) is talking brass tacks now. A press release handed out before the panel says he is announcing that his committee will soon hold a hearing to examine strategies for strengthening service.

"I'd like to think we can win this legislation unanimously and on the floor," he says. The difference: all the young people who have gotten a taste of political service and want to make the system work.

The young woman now speaking is a huge proponent of service learning (sorry, don't have her name). She asks service be required, and sees it as the only way to effect change. Later, she says that "the best way to find yourself is to lose yourself in service."

(See Tweets on the right for up-to-the-minute quotes from this conversation -- easier to track there.)

P.S. The fourth panelist's name is Zarina Hamin. Apologies if I just slaughtered the spelling of her name.

9:10 AM: Congressman and civil rights leader John Lewis is speaking about his sources of inspiration (MLK, Rosa Parks) for getting involved in service. He's always been trying to serve since then.

Lewis's preacherman style is waking up the crowd. He's sharing his experiences on going on a Freedom Ride in 1961, at a time when segregation was alive and well. It's evident how meaningful this inauguration is for him -- to see a black man take our nation's highest oath without "fear of getting arrested, beaten, or given a concussion on a Selma bus."

9:24 AM: Tobey Maguire came to the stage emotional. Lewis's speech really affected him. Plus, he admitted he gets very nervous when public speaking which, yes, is weird for a movie star.

More celebrities! Demi Moore and Ashton Kutcher are now taking the stage. They're revealing the Presidential Pledge, an initiative of their company Katalyst Media.

And now we're watching a short video about the project. Celebrities abound! (I'm sure somewhere Obama is thinking, "Thank God all these famous people support me!")

That said, I do feel inspired. But I also feel a little silly. Because change has to happen bottom up, not top down. Do these celebrities consider simply making the call service enough? And is it?

9:41 AM: The "irrepresible" Michelle Nunn is closing out the program with a final call to service and a call for commitment.

Ta-da! That's it. Quite a packed hour and 45 min. Everyone participating in the service project is now marching -- yes, marching, led by the Magestic Knights (Ballou's marching band) -- to the elementary school. That is COOL.

Ok, kids, I'm out for now. Can't make it to the service project, but if I see follow-up articles I'll pass them your way. Also, more pics will be coming once I'm no longer on bleachers and am plugged in.

Thanks so much for following! I hope you honor MLK with great faith and great energy in service, now and always!
Posted by Julia Rocchi at 7:32 AM